Simultaneous interpretation is a type of oral interpretation in which speech reproduction occurs without pauses, simultaneously with the speaker. For the convenience of the meeting participants, special technical equipment is used.

The workplace of simultaneous interpreters is equipped in soundproof rooms or booths so that the interpreters do not interfere with others, including each other. The text is spoken into the headset microphone and transmitted to the listener through headphones with a portable receiver. 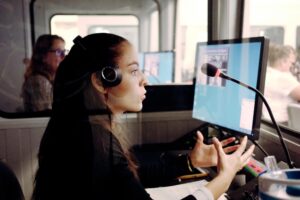 Modern radio equipment for simultaneous interpretation is of high quality and has noise-canceling properties. The sound to the interpreter’s desk comes through the sound amplifier used in the hall. The audience is provided with headphones, the receivers of which are equipped with a channel selection function.

In addition to technical support, the organization of simultaneous translation includes the training of translators. The simultaneous interpreter conducts a study of the topics of the upcoming translation, devotes time to compiling a glossary and psychological preparation. Before preparation, the specifics of the room in which the workplaces will be equipped and the number of speakers are specified. It will be specified whether the screen with slides will be visible, whether there are separate monitors at the workplaces.

The main difficulty lies in the need to keep up with the speaker’s speech, while ensuring the accuracy and adequacy of the translation. The speaker does not keep track of whether the synchronized interpreter is keeping up with him. At the same time, the speech of some persons can be quite fast and dynamic. The tension in the work process creates strong psychological pressure. For this reason, frequent rotation of translators is organized at major events. The simultaneous interpreter works for 15-20 minutes and switches to rest, and the next interpreter takes his place. 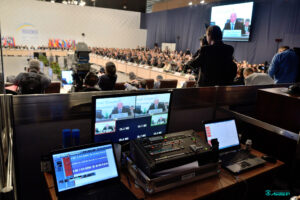 To improve the quality of translation at many diplomatic and state-level meetings, the texts of the speakers are provided to the translators in advance. Sometimes such a text can be provided with a ready-made translation. However, it is taken into account that speakers may deviate from the prepared text or add some comments to it. Of particular difficulty are proverbs, sayings, as well as phrases used in a figurative sense. For example, such as “beat the thumbs up” or the famous “Kuz’kina mother”. It is necessary to quickly navigate in various phraseological turns and stable figurative expressions. Working at the highest level, no mistakes can be made.

Before preparing for a meeting, the translator is advised not only to thoroughly prepare for work, but also to have a good rest.

Qualities required for a simultaneous interpreter:
Fluency in the language. In some languages, individual words have the same sound, but they are spelled differently and differ in meaning. The translator must accurately capture the meaning of such words in the context of speech.
Excellent memory. Synchronicists have to retain a significant number of expressions and terms in their memory. In addition, the peculiarities of some languages ​​are such that the full meaning of the phrase is reflected only at the end of the sentence. You have to keep in mind the exact translation of the expression for some time until the speaker completes the sentence.
Rich vocabulary. It requires the ability to quickly select synonyms for words that do not have an accurate translation into Russian.
Grammatically correct speech. Sentences must have a structure characteristic of the language.
Endurance and stress resistance. These qualities allow you to maintain a quick reaction, to perceive the style and manner of speech of the speaker.
Absence of speech defects. The translator must have a pleasant timbre and correct pronunciation.